Born and raised in Southern California, Deb Massa developed a love of the arts as a young child. She attended Platt College to study Graphic Design and worked for many years as a Designer for WPBT2 Public Television in Miami. Currently she enjoys life as a full-time Artist in Upstate, SC. 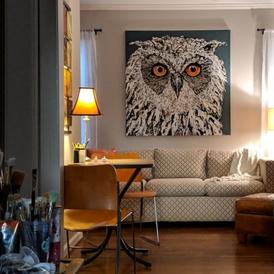 "Sqeezing a bottle of paint across a canvas is both a terrifying and truly exciting experience."